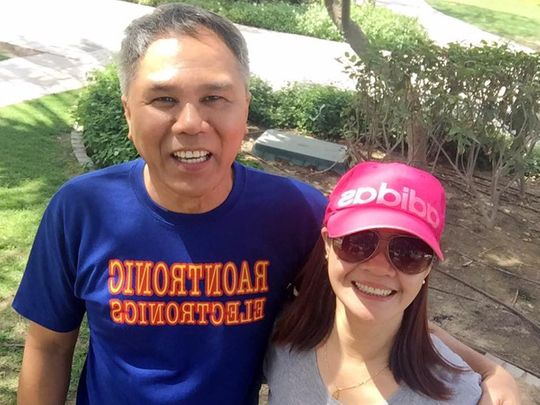 After 23 years in finance, a former resident of the United Arab Emirates becomes an agricultural entrepreneur in the Philippines

Agriculture is not easy, it requires hard work. “Our day starts at 4am. During the planting and harvesting seasons, we have to work under the hot sun. We have to educate ourselves to tend to farm in a way that will guarantee a better return,” said Walter Llanes, a former resident of the United Arab Emirates who returned to his home country of the Philippines after 23 years of work. in a financial role and started farming.

Here’s how this Filipino consciously saved and invested money during his corporate career while supporting his two children. Llanes believes the recipe for success is a combination of hard work and passion, coupled with disciplined savings habits.

Llanes, now in his 60s, has spent nearly three decades in the Middle East, five years in Saudi Arabia, followed by 23 years in the United Arab Emirates. “Fate brought me to the Middle East at the right time and also brought me back to my home country,” he said. Llanes left for the Philippines around mid-2019 before the pandemic hit even as his wife decided to stay and work in the United Arab Emirates.

Throughout his tenure in the United Arab Emirates, Llanes has worked with dedication for an organization. “When I moved to the UAE all those years ago, I didn’t even know good bookkeeping. But I was willing to learn and worked my way up from chief store cashier to junior accountant at head office. “, he recalls.

In an exclusive interview with Gulf News, Llanes shares some practical financial advice based on his real-life experiences.

Be disciplined about saving

Llanes admitted that working in the UAE has helped them save enough and invest in land and property, contribute to their social security system (SSS) in the Philippines, and provide education and maintenance for their children. son.

“During my active corporate career, we have always been disciplined about saving and cautious about our spending habits in the UAE. After paying rent and for other necessities, we needed to have enough money to send home for different purposes,” he explained.

At the time, his major expenses in the Philippines included the construction of their retirement home for Php2 million (Philippine pesos) in 1999 (about Dh130,410 in present value), Php3 million (about Dh195,615) for a condominium in Manila payable on 10 years (whose monthly installment is paid by his wife now) and Php2,000 (Dh130-plus) per month towards SSS.

“Today all of our investments are paying rich dividends. I get a decent amount of money every month from my SSS account. I use it for monthly expenses. If anyone wants to start their business after retirement, they can withdraw a lump sum from his SSS account,” he said.

There is no “magic” number

When asked if he had a certain number in mind to meet before retiring, Llanes said: “Although it is important to have an idea, there is no such magic number. . For example, Php 5 million (around Dh 325,965) will not be enough if someone decides to retire in a top city in the Philippines. I decided to retire in a province called Cagayan (15 hours drive from Manila) where our cost of living is not very high.

Currently, Llanes’ monthly expenses are around Php5,000-6,000 (around Dh325-390), including food for two as his eldest son lives with him, electricity, water, internet and utilities. pet care. It’s always on the “higher side”, he admitted.

“The important thing is to decide where you will live after you retire and save accordingly. If you want to pursue a business, it must be aligned with the needs of adjacent areas. I live in a predominantly agricultural district where a game room or a fast food joint will not be a profitable business proposition. But agriculture, whatever it is, should give good results. That’s why I decided to use a lot of my savings to go into farming and in the last two years I have grown tremendously,” he explained.

The important thing is to decide where you will live after you retire and save accordingly.

Growth mindset is a must

“The original idea was to make mango easier to grow than palay in terms of effort and expense (seasonal expenses of Php9,000-10,000, around Dh585-650]for growing mango against Php20 ,000-plus (about Dh1,300) for paly farming) But after I returned to the Philippines, I realized that the person I rented my land from was not paying me as much as I should, so I decided to take over. It was not an easy decision as palay farming is quite intensive and expensive. But I was willing to learn.

Llanes mango plantation. The seasonal expenditure was about Php 9,000 to Php 10,000 (about Dh585 to Dh650) for mango cultivation.
Image Credit: Supplied

The palatine farmhouse of Llanes. In the first season, Llanes invested Php20,000 (around Dh1,300) and harvested around 70 bags of palay.
Image Credit: Supplied

“I needed to do more research and understand what would lead to better performance. Now I know the expenses better, including the cost of fertilizer, plus the rental of the tractor, water and harvester. Also machines to drain water when it rains as it can destroy the crop. Also, we have to hire people during the planting season, although my eldest son who lost his job in the aviation industry during the pandemic now supports me full time. Considering all these expenses, I have the impression that this season we will see a better return compared to the previous one.

Also, alongside palay and mango farming, Llanes eventually started poultry farming with an initial investment of Php 65,000 (about Dh4,240) spent on buying chicken and fencing the area. “We already had the mango farm, part of which could be used for other things, and I thought about starting a poultry farm. We have 91 laying hens, and it turned out to be a good business idea since we have already recouped the initial investment of Php145,000 (around Dh9,455) by selling chicken eggs.

Although the agricultural activity of Llanes is progressing quite well and he plans to develop further, his financial principles remain unchanged. “I strongly believe in selling in a way that will generate small but sustainable profits, instead of seeing a spike but possibly a decline as well.”

We already had the mango farm, part of which could be used for other things, and I thought about starting a poultry farm

Commonalities between finance and agriculture

Llanes, who is enjoying his post-retirement life, feels there are commonalities between his former financial roles and his current agricultural duties.

“In both cases, I diligently maintain Excel sheets. In my previous role, this helped me track expenses, cash flow, etc., and in my current role, to calculate expenses against the performance and profitability. After all, in agriculture as in finance, having a good grasp of the numbers is key to making prudent decisions.”

In summary, Llanes said, “No matter what stage of life I am in, I will always value the importance of diligent saving. I also think it’s crucial to stay active even after retiring from a full-time job pursuing something we’re truly passionate about. In my case, farming not only generates a sustainable source of income, but helps me learn new things, keep my brain active and my body energized. It’s hard work but worth it. »