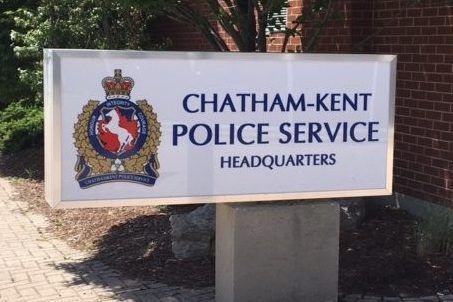 A 42-year-old Bothwell man is facing charges after reports of a domestic row in Chatham.

Chatham-Kent officers, responding to the incident at a Wellington Street home on Saturday, were told an argument had taken place between the man and a woman, police said.

The accused allegedly threatened to harm the woman and then pushed her, police said.

A family member who witnessed the altercation tried to intervene but was also allegedly threatened and assaulted, police said.

The confrontation moved outside, where the accused allegedly continued to assault the family member by spitting and shoving the person, police said.

The accused left before police arrived, but went to police headquarters on Monday morning to surrender. He was charged with two counts of uttering threats and four counts of assault.

He was being held pending a bail hearing, police said.

Chatham-Kent Police are asking for the public’s help in an investigation into a theft involving a red Massey Ferguson Model 253 tractor.

Police said the tractor was stolen from a field adjacent to Zone Road 7 in Bothwell.

The tractor is equipped with a front loader and a metal hook welded to the middle of the bucket, police said.