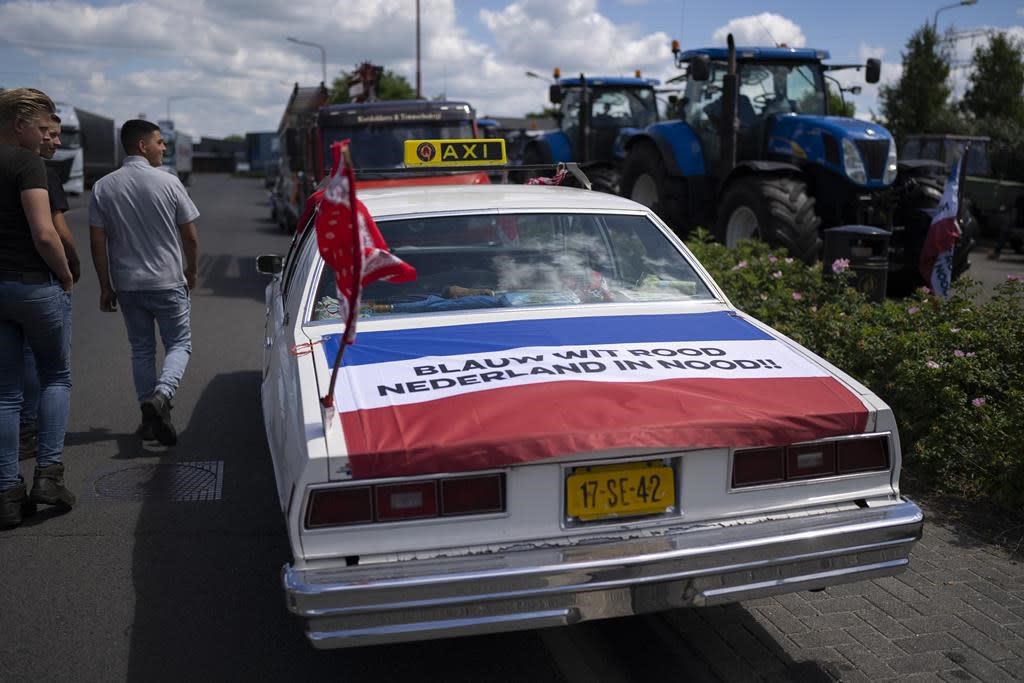 ZAANDAM, Netherlands (AP) — Dutch farmers angry at government plans to cut emissions used tractors and trucks on Monday to block roads and supermarket distribution centers, raising fears of food shortages in stores in recent actions through a summer of discontent in the country’s lucrative agricultural sector.

The Netherlands’ busiest aviation hub, Schiphol Airport, has urged travelers to use public transport to get to its terminals, fearing blockades could also target airports. Fishermen in solidarity with farmers have also blocked several ports.

Unrest among Dutch farmers was sparked by a government proposal reduce emissions of pollutants such as nitrogen oxide and ammonia by 50% by 2030. Provincial governments have had one year to develop plans to achieve this goal.

A group of farmers from the province of North Holland spoke to two senior officials from the city of Haarlem.

“Their concerns are understood and have our full attention. Good to be and stay in conversation with each other,” tweeted one of the managers, Arthur van Dijk.

Dozens more parked their tractors on a bridge over a canal, forcing freight barges to moor on either side as the bridge could not open to let them pass.

Reforms are expected to include the reduction of livestock and the buyout of some farms whose animals produce large amounts of ammonia. Farmers say they are unfairly targeted and given no perspective for their future.

Police watched but did not immediately take action on Monday as some 25 tractors were parked outside a distribution center of the Albert Heijn supermarket chain in the town of Zaandam, just north of Amsterdam. Placards and banners affixed to the tractors read messages such as “Our farmers, our future”.

A tractor at another protest, in the northern town of Drachten, urged people to “think for a moment what you want to eat without the farmers”.

The supermarket umbrella organization called on the police to take action and warned of possible shortages on supermarket shelves.

“Distribution center blockades are hurting the citizens of the Netherlands. Supermarkets are doing all they can to keep stores stocked, but if lockdowns continue it could prevent people from getting their daily groceries,” the Central Food Trade Bureau said in a statement.

Traffic authorities warned motorists to be prepared for delays and possible slow tractors on the country’s highways, but said there were few problems early Monday for commuters, possibly because many people have chosen to work from home rather than being stuck in traffic.

Over the weekend, the government appointed an intermediary to lead discussions between farmers’ organizations and officials drawing up pollution reduction measures. However, Prime Minister Mark Rutte has ruled out negotiating with farmers responsible for radical protests.

Mainstream farming lobby group LTO described the mediator, Johan Remkes, as “an administrative juggernaut with deep knowledge” of the issues and said it was open to talks with him.

According to LTO, there are nearly 54,000 agricultural businesses in the Netherlands with exports totaling €94.5 billion in 2019.