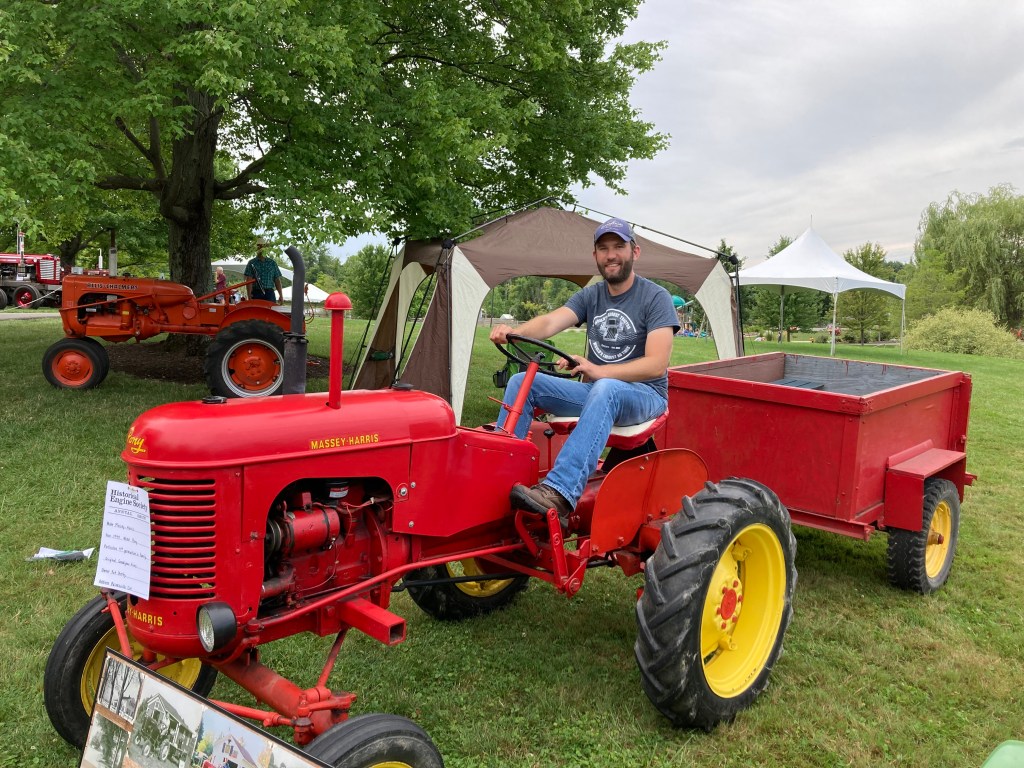 People of all ages flocked to Lake Metroparks Farmpark on July 31 for the final day of the 51st Annual Ancient Energy Expo, co-hosted by the Historical Engine Society and the Farmpark.

This year marked the first time the Farmpark in Kirtland hosted the three-day show. Representatives of both organizations were satisfied with the results.

“They’re all about agriculture,” McGovern said of the company, “and Farmpark…to let people know where their food and fiber comes from, so so far it’s been a great partnership.”

Company President Dean Kirby said, “This year’s show exceeded my expectations. You know, every time you make a historic move, you’ll notice a little drop in the number of exhibitors and spectators. We broke that mould. We have actually seen an increase in the number of visitors and exhibitors.

He noted that the Farmpark offered 235 acres, more than the previous site. The new location also allowed visitors to experience the Farmpark animals and animal demonstrations alongside the old machines.

Kirby added that event attendees could “see the progression of how far we’ve come with the technology that goes into farm tractors.”

Some of the vintage tractors on display not only offered insight into the history of farm equipment, but were also steeped in family history.

Pat Shelby brought a 1949 Massey-Harris Pony tractor. His great-grandfather bought the tractor for a nursery he was planning to open with his brothers. Three generations of his descendants – Shelby, his father and his grandfather – were all photographed with the tractor on the same property in Concord Township.

Shelby worked to restore the tractor with his grandfather in the early 2000s. The Pony’s engine and wheels are original, he said, along with the tongue, axle and spring.

“I’ve been doing that all my life, you know, playing with tractors in the yard there and tinkering with stuff in the garage with Grandpa,” Shelby said.

Mike Conti’s tractor also carried a long family history. He brought a 1945 John Deere Model B, which his great-grandfather bought that year for their farm in Conneautville, Pennsylvania.

“My grandfather grew up on it, he worked with this tractor, it was their workhorse,” he said, noting that it was the family’s main tractor in the 1960s.

They kept the tractor on their farm until 2000, when they brought it to Chardon and had it restored. For a time, Conti’s family took the Model B to Patterson Fruit Farm in Chesterland, where they were pulling wagons for a festival.

“It’s fun to play with. It’s not something you see every day, few people can play with it and see it,” Conti said.

“The day I got him, the day he was dropped off at home, my wife came downstairs to tell me she was pregnant,” Kibby said.

He added that he hopes to enjoy the tractor with his son once he is old enough to use it.

Expo organizers raffled off a blue 1964 Ford 2000 tractor, which Frato said was restored by the family of company vice president Adam Lang, along with a blue pedal tractor and a model of tractor.

Conti agreed, pointing out that as far as he remembers, his 1945 Model B was last taken to a John Deere dealership in 1962. The main concerns, he said, are s Make sure it gets oil changes at least once every two years, runs on fresh fuel, and has enough coolant.

In addition to the Antique Power exhibit, members of the Historical Engine Society meet at Farmpark once a month, Frato said. They are also helping with Horsepower Weekend, which will be held at Farmpark this year on the weekend of September 24-25.

“They just add to what Farmpark brings to the community,” McGovern said.

Kirby noted that each year’s show featured engines. Features this year were Massey-Harris and Massey Ferguson tractors, Speedex garden tractors, and Fuller and Johnson gasoline engines. The engines presented next year will come from the period before the Second World War.