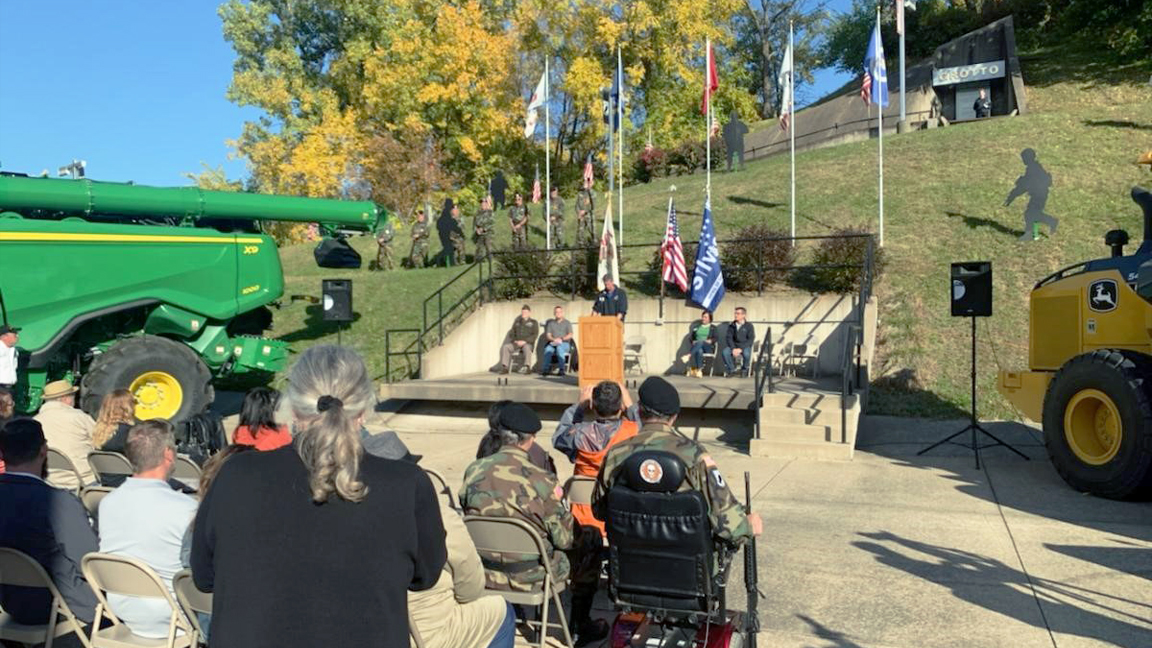 Major General Jeffrey Jurasek describes Hero Street in Silvis as shaped by grief and tragedy, but also as a place of reverence and celebration.

The people gathered on Wednesday for the re-inauguration of Hero Street could feel all these emotions. New permanent golden stars now sit in front of each of the Hero Street 8 houses.

Town of Silvis crews placed the new stars, made by John Deere Harvester Works employees, in front of homes. The new stars were laser cut and painted at Harvester Works in East Moline. The steel stars replace the painted stars currently on the street.

Nine members of Hero Street’s Munos family have served in the military. PFC John Munos was killed in action in Korea in 1951. His two great-nephews attended the rededication.

“Every day we’re here is emotional,” said Daniel Munos, adding “Families give, you know, just as much as the soldier at the end of the day.”

His brother Brian served in the Navy for 20 years. As Brian stood by the family home, he said, “This house represents the Munos family who migrated here from Mexico, lived in boxcars and eventually lived in this house.”

He thinks about his great-uncle’s memorial. “The gold star represents the family that gave this warrior.”

Members of the Mexican American Veterans Association served as color guards to present the colors, before a salute and the sound of tap dancing during the ceremony.

The military tradition in this one and a half block neighborhood of Silvis runs so deep. More than 100 servicemen came from the families that settled here, many of whom lived in boxcars and worked for the Rock Island Railroad.

Many other residents of this neighborhood have had long careers with Deere, leading the company to become involved in the project of creating more permanent gold stars in every home.

Longtime neighborhood resident Sonny Soliz hopes more people will visit because “the men and women who wore the uniform need to be remembered and honored.”

Is the recent performance of Escorts Kubota Limited (NSE:ESCORTS) shares influenced by its fundamentals in any way?