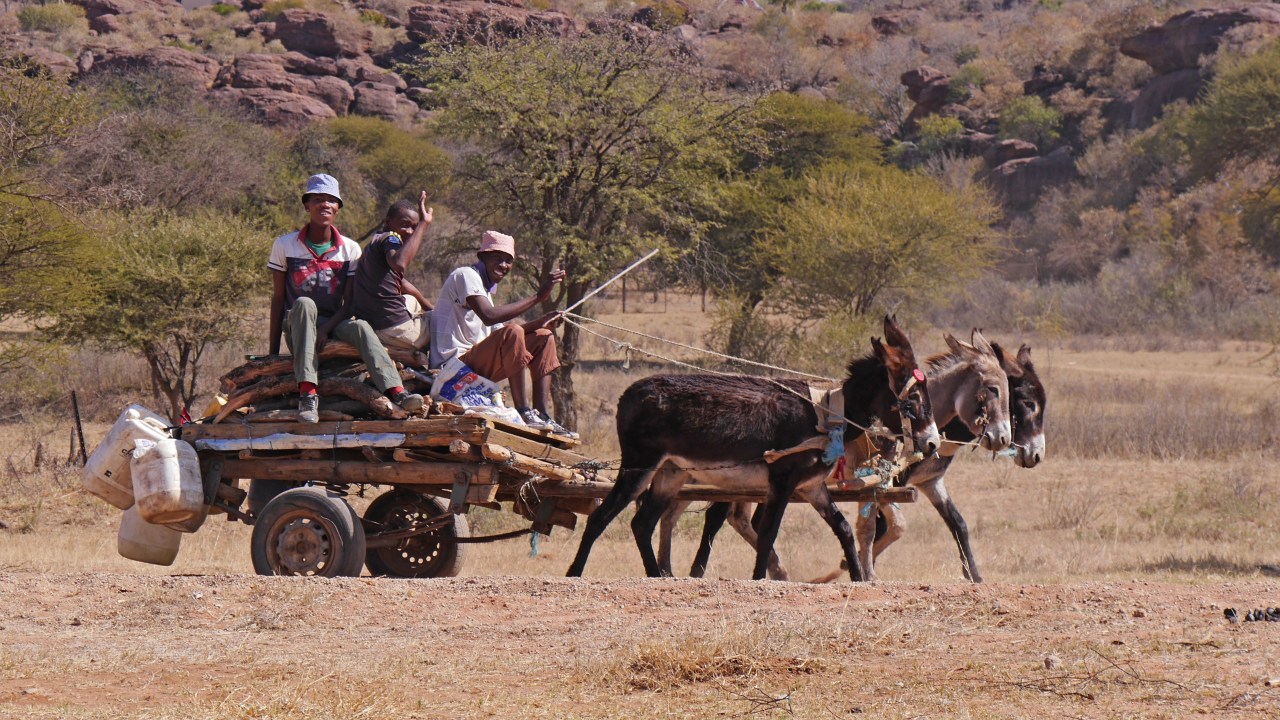 The donkey war and the green revolution

A war suggests opposition, so the events that took place in Bophuthatswana in 1983 could more accurately be described as a massacre. Somehow, this massacre never made it into the history books and is remembered only by its victims.

Given that the shooting – in which more than 20,000 people died – occurred just a few hundred miles from Johannesburg, the near absence of news coverage about it was remarkable. But then, depredations against land-poor peasants rarely make headlines anywhere in the world.

For one old man, the slaughter began while he was on his way to collect construction sand in his cart pulled by four donkeys. A troop carrier roared towards him and soldiers opened up with automatic weapons on his donkeys, killing them in their harnesses.

In the small village of Ncweng, people had gathered their donkeys to count them. The soldiers arrived and fired into the field. They then fanned out across the veldt, searching the river valleys and grazing areas, firing bullets at every donkey they found. People who resisted were harassed. A few, aware of the danger, hid donkeys in their homes. The soldiers then moved to the next village, then the next…

“They didn’t aim,” one person told the researcher Nancy Jacobs. “They were shooting animals anywhere, as often as it took to kill them. They were not put to death, they were ravaged. Others were shot in the eyes, or in different parts of the body and in the feet. It made the killing horrible because they had to suffer too much.

The reasons for the great donkey massacre are obscure. One story was that the president of bantustan, Lucas Mangope, once nearly collided with donkeys on a highway and had turned against the species. Others said that, given the opposition to the Bantustan system of apartheid, it was an attempt to terrorize people and anticipate opposition. Some have speculated that the culling was a decision by the upper class of cattle ranchers to reduce pressure on grazing.

The official decree simply announced that the “surplus” donkeys were to be exterminated, but the trigger-happy soldiers quickly turned the slaughter into a mass slaughter. The estimate of 20,000 dead donkeys is probably conservative.

Stumbling upon this story, I started looking for more information about the donkeys and discovered that a global jihad seemed to have been declared against the humble donkey. A report from Brazil spoke of donkey capture units rounding up thousands of animals to deport them. In some areas, donkeys have been completely banned.

In Western Australia, culling is high tech: “Judas” donkeys are fitted with radio collars and are released in search of herds that “infest” the scrubland. These are then blown from a helicopter. Since 1978, the Department of Agriculture has killed over half a million people this way.

Given the biblical reverence for the donkey, its hardiness, longevity, intelligence and gentleness, it’s a strange war of man against beast.

It seems that in South Africa, the donkey wars were part of an ongoing story of displacement of draft animals by the Green Revolution. The pulsating engine at the heart of this revolution – which was to feed the burgeoning world population – was the tractor. This clumsy machine was arguably one of the finest developments of the 20th century, opening up millions of hectares of land to agriculture. It has quadrupled production and supported the growth of megacities.

By the 1930s, governments, agricultural educators, and extension workers had fallen in love with modernization. Using oxen for ploughing, they told the peasants, was primitive. Cattle were for consumption, not for traction. Donkeys, well…they were good at feeding time in lion parks and crocodile farms. But, otherwise, they were a hell of a nuisance. Moreover, they were a sign of poverty. Better get rid of it.

There was another reason officials and industry were wary of animal traction. In the 19th century, most non-railway transportation was pulled by animals. During the last decade of this century, however, the deadly disease of rinderpest, followed by African horse sickness and East Coast fever, decimated draft animals. Trade in southern Africa has been crippled.

Before the memory of this disaster faded, there was a massive demand for equids – horses, mules and donkeys – occasioned by the outbreak of the First World War. In this conflict, more than six million perished on the battlefields. A worldwide shortage of working animals followed.

When the internal combustion engine entered mass production in the 1930s, it was hailed as the final solution to these problems. And so it was.

After World War II, agricultural extension workers, trained in modern farming methods, encouraged peasants to sell their oxen, slaughter their donkeys, and wait for the Massey Ferguson wonder. The green revolution was about to begin.

While South Africa’s 60,000 commercial farmers took out loans from a nice land bank, bought tractors and implements and devoted themselves to feeding the nation, the 500,000 small and mostly black farmers were not loan applicants.

The government, anxious to increase production in the bantustans in order to feed the masses locked up by decree (and to ensure their stay there), creates diagrams of tractors. But its officials forgot to ask small farmers how they did it. The new method upended centuries of common animal knowledge and support systems.

Somehow, whenever a tractor was needed, it was somewhere else (perhaps if a goat was offered, it would come). Control of agriculture has seeped out of the community and into the hands of tractor drivers. If the tractor broke down, this control passed to the mechanics of the towns, far away. If parts were needed, it went even further, to city officials.

For the farmers who had eaten their trail oxen and sold their donkeys (or had them slaughtered), there was nothing to do but wait, look to the sky, and hope. Some fields were plowed, many were not. Then the government, plagued by mismanagement of the programs, decided to rent tractors to their drivers, who had to run their own business.

The plan created problems. Farmers paid drivers to plow, but only what they could afford, and often in kind. Drivers weren’t good at calculating overhead, so when implements broke or the tractor needed fixing, they didn’t have cash. You cannot pay a mechanic in goats or donkeys.

The tractors were left in the fields, quietly rusting. One after another, tractor projects collapsed. In many parts of the country, you can still see dead tractors all over the countryside: peeling monuments to questionable intentions.

The tractor debacle took about 20 years to unfold. By this time, a generation of newly “modern” farmers had learned to depend on machines. Vital animal handling skills had been lost, along with the animals. Instead of thriving, peasant agriculture was collapsing, with families dependent on wages paid by relatives living in urban areas.

After the 1994 elections, legislation that confined people to bantustans was repealed, and people from these areas flooded the towns. The squatter camps around towns in South Africa bear witness, in part, to a failed agricultural policy.

And the humble donkey? It is tempting to view the Bophuthatswana donkey slaughter as a metaphor – the imprint of the mechanical age against its older, animal-using predecessor.

Well, here’s a prediction, for what it’s worth: the donkey will survive modernism – and the postmodern era as well.

The rabbit-eared equine was probably the next creature to be domesticated after the dog – around 8,000 years ago. It is said to have been the first draft animal in human history and there are good reasons for its long and continuing association with our species.

We live in a world where population growth exceeds the capacity of governments to ensure global human prosperity. Contrary to the dreams of modernism, the standard of living in marginalized countries is falling while the rain increasingly does not fall. Attempts to mechanize small-scale agriculture in these areas have failed.

As men made their way to the cities to earn what they could, marginal farming became women’s business. And the donkey is a woman’s best friend.

Donkeys seem to like human company. They are small enough to handle easily, can survive in drought-stricken areas (they need little water), eat less food than oxen but can work just as hard, and have remarkably long lifespans ( up to 50 years). They are cheap, produce drinkable milk, rarely get sick, make lifelong friends, and are very intelligent.

They can haul water and firewood all day, plow and protect herds (they have an ingrained dislike of dogs and jackals and will kill them with lethal blows to the front hoof if they threaten). Besides its annoying tendency to ignore approaching motor vehicles, the donkey remains, after 8,000 years, the perfect farm companion.

There is a side to her character that irritates men but that women understand. You can beat an ox and command a horse. But with a donkey you have to negotiate. And women are good negotiators. So as long as there are women on the earth in developing countries, there will be donkeys trotting behind them. DM/ML