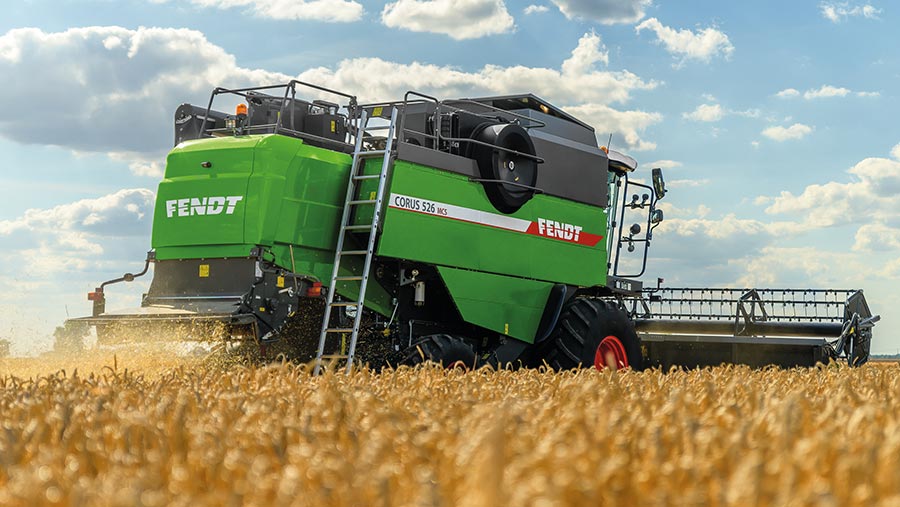 New and improved models up and down the performance spectrum feature changes to this year’s Ultimate Guide to Combines, along with the arrival of the first £1m machines.

Not a price producers will pay, of course, given the “discounts” available to get a bargain price in the sweet spot, but a benchmark nonetheless.

Montana self-leveling combines are back in the Lexion range © Claas

An addition to the Trion range introduced for this year’s harvest and improvements across the board for Lexion combines are Claas’ headlines for the 2023 harvest.

The Trion addition is part of the 500-series five-walker machines, with the 540 having the same spec as the current 530 but sporting more power at 354hp versus 306hp for extra performance where muscle counts.

There are wheeled and Terra-Trac versions available with 9,000 liter or 10,000 liter grain hoppers.

A wider cabin – as for the first time on Trion combines – with more interior storage, an optional swivel seat and various measures to improve visibility is introduced on all Lexion models. 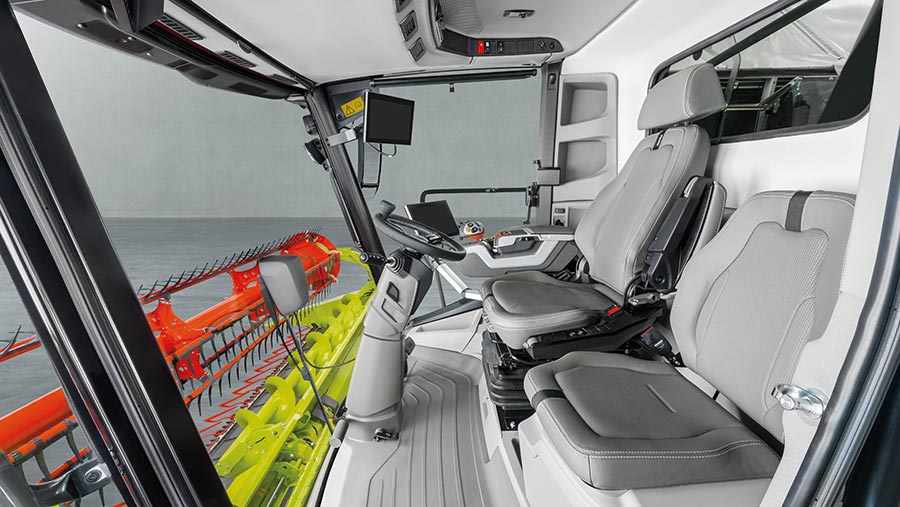 Additionally, Montana self-leveling machines return to the lineup to meet the needs of growers in hilly terrain who want slope compensation beyond what the 3D Dynamic Top Screen and bomb door” with rotating cage.

Beneath the flagship Lexion 8900, a model redesign sees the Lexion 8600 in wheeled form and Terra-Trac entering the lineup with 549hp from its MAN range.

In addition to the already extensive selection of automation functions available on Trion and Lexion combines, Cemos Auto Header is a new option for the Vario cutting table.

It uses the cab roof mounted laser scanner used for Field Pilot guidance to identify changes in crop height and adjusts reel height and position to maintain consistent infeed performance, while also adjusting distance between knife and auger if necessary.

An electronically controlled hydrostatic transmission is arguably the most significant upgrade as it is said to respond quickly to speed control inputs and in road travel mode it automatically lowers engine speed to consume less fuel. fuel.

Increased power from an Agco engine boosts the base model from 176hp to 185hp and the second ‘E’ machine from 218hp to 225hp; a third variant then arrives with 260 hp.

All three versions can now be fitted with Agco’s Power Flow screed up to 6.2m wide with an extended knife position and conveyor belts carrying the crop to the collection auger, or the conventional Free Flow design up to at 7.6m.

Combines also come with straw walkers as the only separation mechanism or with the Multi Crop Separator peg drum for more intensive separation and walkers of the same length.

While the cabin structure remains unchanged, interior updates have been made to the seat-mounted control console with the addition of in-cab controls for concave and sieve adjustments among the changes.

Ideal top-of-the-line combines also caught the eye, with a heavy-duty ground drive option for 8T, 9T and 10T machines on the TrakDrive undercarriage to provide extra tractive effort for work in rolling fields and for road travel.

Additionally, a 76cm traction belt and 800/70 R38 front tire will be available along with 520/85 R30 rear tires for increased contact patch on the terrain in a total width of 3.5m. 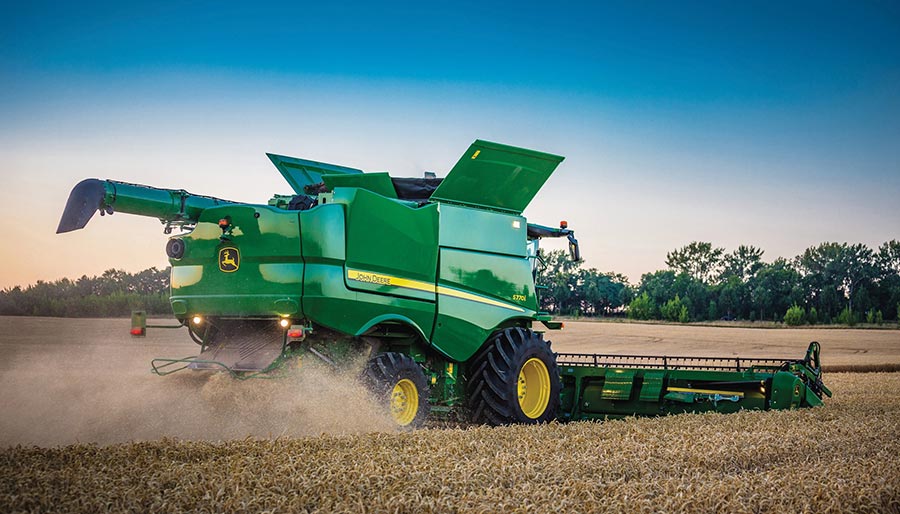 There are no changes to the model lineup of the John Deere lineup, but the HarvestLab 3000 constituent sensor for on-board grain and oilseed analysis is a new option.

This NIR device is increasingly being used on John Deere forage harvesters, slurry tankers for manure nutrient analysis and in stationary applications, and is now available for the grain detection function.

The device measures the moisture and protein content of wheat, barley and rapeseed, the starch content of barley and the oil content of rapeseed continuously and in real time.

And John Deere Operations Center software can be used to produce an “outline map” of these constituents for field management.

Deere says the system can also be useful for separating grain at harvest based on quality parameters. 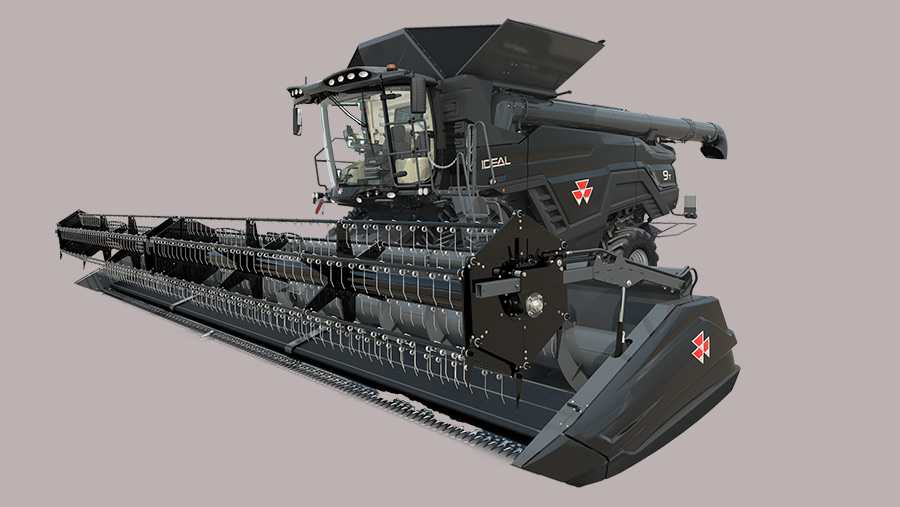 Joystick steering is a new option for an unchanged range of high-end Massey Ferguson Ideal combines.

Available on all three TrakRide variants running on triangular track assemblies, the system removes the steering column and steering wheel to open up an unobstructed view of the header.

According to a trial from Aalborg University in Denmark, operators performed simulated driving faster and with significantly less intervention using the left joystick.

Field observations also noted that operators tend to sit in the seat in a more comfortable and relaxed position, as opposed to leaning over a steering wheel.

In addition to steering, the joystick has buttons to operate the turn signals in road mode, and others operate the horn, switch between high and low beams and activate terrain guidance.

Among other changes to the cabin, increased insulation has had a significant effect on the noise level at full power, says Massey Ferguson.

There are also new storage compartments on the rear cabin panel, as well as additional holders for an iPad, two USB charging ports and a smartphone holder with integrated charger on the seat-mounted control console. 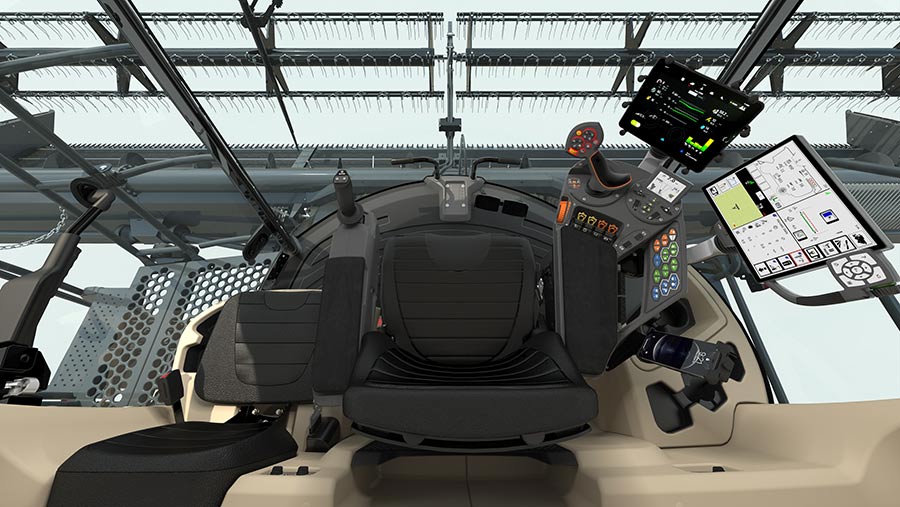 At the other end of the performance scale, the two entry-level Activa combines have been upgraded and joined by a third.

They power a new hydrostatic floor-drive transmission that is now electronically controlled for improved responsiveness and “smart” features, such as engine speed reduction for road travel.

All three machines are available with or without a rotating peg drum separator element, which is positioned between the thresher and thresher, and the five walkers when installed.

The Multi Crop Separator grid can be pivoted out of the crop flow to prevent damage when harvesting very dry and brittle crops.

All three combines can be fitted with the MF Free Flow header, but the Power Flow unit, which has an extended knife position and feed belts between the knife and the auger, is an option.

The two collectors are connected by a multi-coupling for hydraulics and electrics.

In the cab, new controls and a revamped layout are evident, with Agritronic display and grain loss monitor fitted as standard, and with new options that include in-cab sieve adjustment.

See the extraordinary from the ordinary