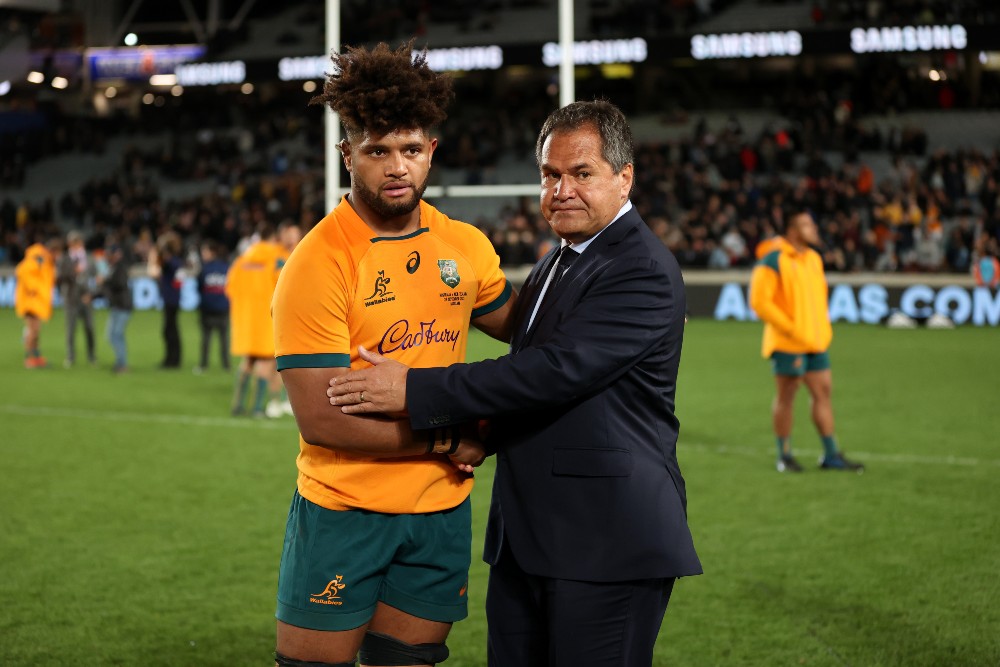 Second best in all areas by their own admission, the Wallabies must now regroup after another bombardment of Eden Park to take on the powerhouse of European rugby.

Australia were beaten 40-14 in Auckland on Saturday night and face stark scrutiny for their failings.

“I think our preparation has been excellent…and the All Blacks have overshadowed us everywhere,” admitted coach Dave Rennie.

It could have been worse for the Wallabies, down 32-0 with 20 minutes left to put the All Blacks within a converted try by the biggest trans-Tasman margin in 119 years of competition.

Avoiding this ignominy does not save face, and Rennie knows it. Asked to describe the positives of their last trip to Eden Park – their 23rd successive loss to the All Blacks at the feared venue in 36 years – Rennie differed.

“I’ll let you know in about two or three days, when I’ve looked into that,” he said.

“We tried to rush them and stress them out, but we couldn’t.”

Rennie’s winning record in three years at the helm now stands at 38%.

With Australia ranked ninth in the world, Rennie has a month to recalibrate for a European tour of Scotland, France, Italy, Ireland and Wales.

He will make this trip without a wealth of talent and experience.

Marika Koroibete is not available, she must return to Japan in club.

Bernard Foley, who Rennie said was knocked out in Saturday’s loss, could join him, although the Wallabies are negotiating with Kubota Spears to keep him.

Rennie ruled out changes to his fitness and conditioning team, calling them “among the best in the world”, blaming the injuries on collisions.

It’s unclear if Scott Sio, who suffered a hamstring injury in last week’s 39-37 loss to Melbourne, will recover; Michael Hooper is a “wait and see” after his personal leave, and Tom Banks is likely, but not certain, to return.

Wallabies fans might think these games, especially against world No.1 Ireland and No.2 France, might get ugly.

Rennie has another word for the daunting prospect.

“When you play a lot of football with a lot of young men, the more we play the better it is before a World Cup year.”

Captain James Slipper says he has “a lot of hope” for the France-hosted tournament.

“The beauty of the last three years is that we’ve been able to bloody quite a few Wallabies and they will continue to grow,” he said.

“But the biggest aspect we need to improve is consistency. We manage to put in a good performance and then back it up with a bad one.

“We can’t do that at a World Cup, but the main thing is that we are confident. We just have to build momentum and keep improving.”