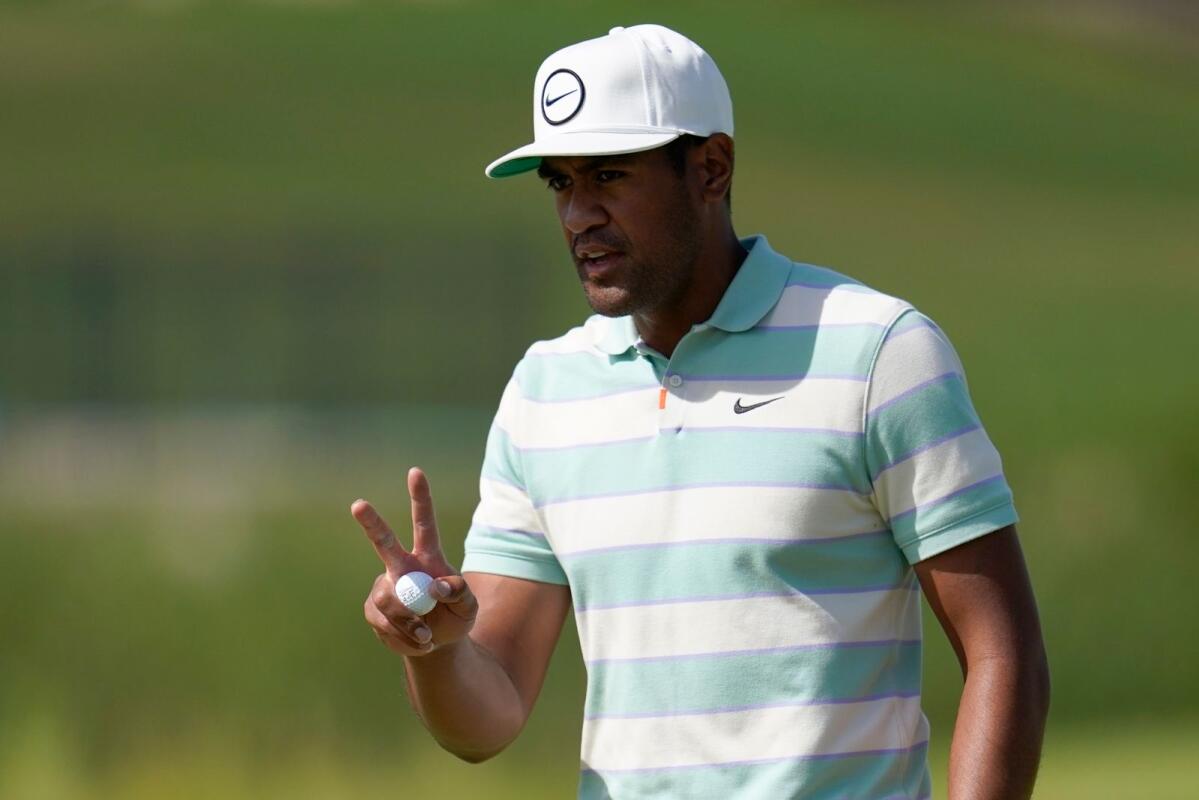 Tony Finau, acknowledging the applause from the gallery on Sunday after his putt on the 16th hole in the final round of the 3M Open golf tournament at the Tournament Players Club in Blaine, Minnesota, will be in Cedar Rapids on Monday for the Zach Johnson Foundation Classic. (Associated Press/Abbie Parr)

There’s Davis Love III, winner of 21 PGA Tour events and the 1997 PGA Championship. There’s Stewart Cink, who has eight Tour victories, won the British Open in 2009 and once spent more than 40 weeks among the top 10 golfers in the world.

Love, however, is 58 and unlikely to win any more titles. Cink is 49 and still plays golf. He finished tied for seventh at the Valspar Championship in March and wrapped up a 24th-under-6 finish on Sunday at the 3M Championship in Blaine, Minn.

But his winning days may be behind him too – until he turns 50 and takes part in the Champions Tour.

But the ZJFC has always been more than the golfers on the course. It’s about giving back to the community where Zach Johnson grew up and has never been forgotten.

It also includes Tony Finau, who just won the aforementioned 3M Championship on Sunday. He shot rounds of 67, 68, 65 and 67 to finish at 17 under, three shots ahead of Sunjae Im and Emiliano Grillo.

It was the third career title for the 32-year-old from Salt Lake City.

To say Finau is hot right now is a heavy understatement. Sport is, after all, a “what have you done for me lately” business. Finau has done a lot lately.

He was ranked 17th in the world entering the 3M Championship – the highest ranked professional in today’s classic, and owns the top 10 RBC Canadian Open results (second) in June, at the Open of Mexico (tied for second) and the Charles Schwab Challenge (tied for fourth) in May.

He missed the cut at the US Open in June but bounced back to finish 13th at the Travelers Championship and 28th at the British Open.

Heading into Sunday, he ranked 37th on the Tour with just over $2.6 million in earnings. He picked up an additional $1.35 million on Sunday.

He’s not a villain to watch out for on Monday if you venture into Elmcrest.

There are others too.

JT Poston of Hickory, North Carolina finished tied for 11th on Sunday, shooting laps of 71, 69, 64 and 72. That 64 tied the second fastest lap of the weekend.

Golf fans will remember, Poston, 29, won the John Deere Classic earlier this month in Silvis, Illinois. He missed the cut at the British Open, but finished second at the Travelers Championship the weekend before winning the JDC.

He was ranked 63rd in the world before the weekend and had earned nearly $3 million this year.

It’s a pretty hot sequence, too.

Other pros to watch today include Luke List, a 37-year-old from Seattle who ranks 68th in the world and won the Farmers Insurance Open in January; and Denny McCarthy, a 29-year-old from Takoma Park, Maryland, who ranks 89th in the world but has finished in the Top 10 in three of his last four starts, including a tie for sixth in the John Deere Classic.

And there’s always the host, of course. Johnson, 46, isn’t having a stellar season — his best result is a tie for 13th at the Valero Texas Open and he’s missed the cut in five of his last eight starts — but he still has 12 PGA wins. Tour, a Masters green jacket and a British Open Claret Jug and over $48 million in career earnings.

You may not see Scottie Scheffler, Cameron Smith or Rory McIlroy today, but the golf will be good and the cause will be even better.

After 23 years in finance, a former resident of the United Arab Emirates becomes an agricultural entrepreneur in the Philippines